Some pictures have stories behind or around them. 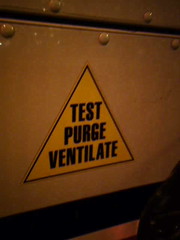 Saw this on the back of an nStar utility truck as it was parked in Downtown Crossing. I eagerly took a snapshot and then turned around to greet the very large, very Southie employees of nStar, who were very curious as to what I was doing taking pictures of their vehicle. I explained I liked the words on the picture, I liked the triangular formation, I mentioned some bullshit about composition, and I also said I didn't know what they meant, but I liked 'em all together.

Turns out these are the three steps utility workers have to take when opening a manhole cover so as to not have it explode and send the cover flipping like a giant steel DISC OF DEATH over the unwary population. Cool, eh? They were nice guys, really helpful in explanining their manhole access process, and they let me keep my camera and my nose intact, so I gotta say, I was happy.

Later on last night I was sitting in the Davis Square central park with Clem, showing her the picture on the phone so I could tell the story of the nStar workers and all that. We were approached by one of Davis' finer colorful citizens, an friendly older hippy with a Jack Russell terrier. I don't know her name, but she was friendly and when she noticed us swapping a cameraphone back and forth, wanted to see the picture too -- "I like seeing things I've never seen before!" -- and so I showed her the camera. She squinted at the picture, frowned a bit, and furrowed her brow.

"It says FUDGE," she finally concluded. Then she said "You two are made for each other. I, I can tell."

Clem and I looked at each other. I meant to say "wait, what" but instead it came out as "Er, how can you tell?"

"Because she's got dimples!"

"Uh, okay. Nice dog," a rather dimple-free Clem said, trying to change the subject. "What kind is he?"

"Brown," the lady replied. "Actually he's a Jack Russell Terrorist. He's very serious, as you can see. He likes being very serious." The dog ran around and wagged his tail and sniffed at some leaves on the ground because that is what serious dog terrorists do.

And that's just two stories that came out and around this innocuous poorly-lit picture of a triangle with three words in it. 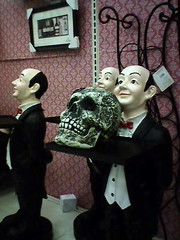 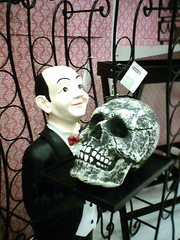 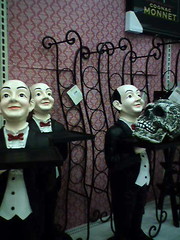 Some pictures, on the other hand, defy conventional storytelling altogether.
Tags: pix
Subscribe