So much Rock Band 2 today and tonight. I can't feel my fingertips anymore. That's a lot of playing, boss. So instead of yammering on about the game, I thought I'd post some random cameraphone pics from the past month or so before I pass out. The first two are from Lowell, and the bottom three are from Canobie Lake Park. 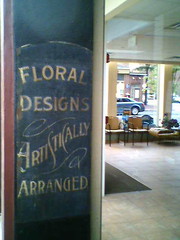 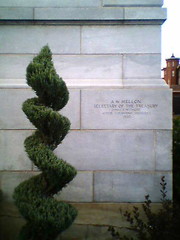 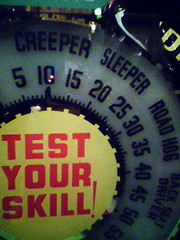 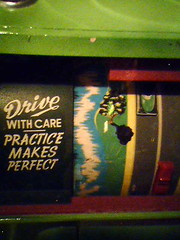 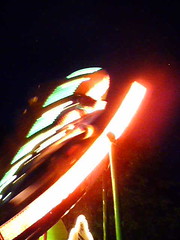 Old driving simulator, still in the arcade but not in working condition. Plus the Skater ride at night.

2. The band animations and character interaction is much more detailed and rich. The guys wander all around the stage, sharing the mic to sing harmony, posing all band-like during songs a lot more than before. The camera got too close to my bassist and he kicked it away at one point. At another point during Come Out and Play, there was a cut to my drummer and she smirked at the camera and went "You gotta keep 'em separated." OKAY THAT WAS PRETTY MUCH THE BEST. The band is having fun onstage, goddammit, and that means we are too. The crowd is also a lot more active, which adds to the energy during a good song.

3. The band challenges are the best way to get people to play DLC more. Want your glam rocker to do an all-Bowie set? Here you go, it's all made for you and you get some cash out of the deal as well. Want to play Doolittle in its entirety? Go right ahead, and get rewarded for it. I am really loving the bass challenges because they turn out to be the best songs to bounce to. Pump It Up, Cool For Cats, Psycho Killer, and Go Your Own Way have kickass basslines which I will gladly play over and over and over and over again.

5. Being able to pick your bandmates even when you're playing solo is pretty much worth the price of the game just so you'll never see the freaky mummy girl or the Marilyn Manson lookalike again coming in to ruin your Jimmy Buffett set. Though I do admit it was very amusing to watch the bearded lumberjack guy sing Still Alive. But that's in the past. The present involves Prisoners of Funk and their all-appropriate look. Yeah, man.
Collapse