It was very cold and very dry when I stepped out this morning so the ice and snow underfoot made it sound as if I was descending down a stair covered in Cap'n Crunch. I'm surprised I didn't wake up the entire neighborhood.

The snow is still clinging to the trees in that "I'm frosted and delicious!" kind of way, owing to our OMG DETHSTORM3000 a few days ago. Most of the precip fell as the temperature hovered around freezing, so the wet snow covered everything and stuck to it. As the temperature dropped and the stuff stopped falling for the most part, we were suddenly surrounded with nothin' but white all over the place. When I stepped offa the T in Davis the air was clear but the snow was everywhere. The light strands in the trees on the park underlit the snow on the branches, I wish I'd taken the picture of the two snow bicycles chained to a snow parking meter, but I'd forgotten the phone had battery power until I reached my street. The light was low so I told the camera "take in all you can!" and it it did its best, as best as a little scrappy cameraphone can do. 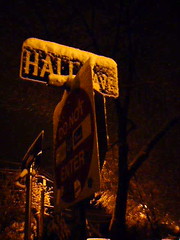 Our manmade signage rendered useless by the onslaught of blinding, obscuring snow, we locals had to navigate by natural landmarks such as "that ramp of snow what used to be the sidewalk." 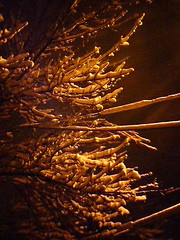 Then I met a crystalline alien entity or something. Maybe it's a sea creature. I'm not quite sure. But the light sure made it look groovy.

ayelle has brought to our attention the story of a nature writer whose textbook descriptions of the black-footed ferret were lifted, word-for-word, and used as pillow talk in a romance novel. Paul Tolme's article on the black-footed ferret, which he researched in South Dakota, was originally published in Defender magazine's summer 2005 issue. Somehow, he became an unwitting contributor of dialogue to Cassie Edwards' romance novel "Shadow Bear", in which the exotically-named Shiona Bramlett falls in love with a Lakota chief named, uh, Shadow Bear. Tolme, alerted to this lifting by a romance novel snark blog, reads the book and discovers that portions of his article were placed hot on the heels of a torrid sex scene. I quote:

...a few pages later, as Bramlett and Shadow Bear bask in their postcoital glow, my ferrets arrive on the scene.

Bramlett hears something rustling in the bushes and recoils in fear. Could it be the evil Jack Thunder Horse, come to steal the map that reveals the secret location of the gold discovered by her late father?

It's just a family of ferrets. Phew. Let's put aside for now that ferrets live on the prairie, where there are no bushes—never mind the forest where Edwards has set her characters. Seeing the cute animals, Shiona and Shadow Bear launch into a discussion about the cute little critters.

"They are so named because of their dark legs," Shadow Bear says, to which Shiona responds: "They are so small, surely weighing only about two pounds and measuring two feet from tip to tail."

Shiona then tells Shadow Bear how she once read about ferrets in a book she took from the study of her father. "I discovered they are related to minks and otters. It is said their closest relations are European ferrets and Siberian polecats," she says. "Researchers theorize that polecats crossed the land bridge that once linked Siberia and Alaska, to establish the New World population."

Ohmygod that is so hot.

Well, we took a look at that and worried. You see, we had been hard at work on a romance novel of our own, tenatively entitled "Buffalo Love", and had just smoked two cigarettes (one for each of our protagonists) after finishing a particularly steamy passage. We worried slightly because, as you see, while we were in the midst of this strenuous writing, a Wikipedia window just happened to be open and we might have kinda glanced its way while tapping intently on the keyboard. However, after reading over the finished passage, we are certain that we did no wrong and that nobody will notice anyway.

It's certain we've nothing to fear.
Collapse