There was a humongous blackout in Somerville on Friday night. I'd ridden the bus back from Lechmere after a particularly wonderful dinner date ("It may be necessary, sir," the waiter informed me with all officiousness, "to inform the lady that if she does not finish her dessert, she will not be allowed to leave the premises" -- that's one of the problems of ordering a slice of chocolate cake which looks like the prow of a ship) and discovered while that most of Davis Square was bright and lit, the Store 24 was closed and at 10:00 pm, even. Well hell, I thought; I was going to stop in and grab some beverage before heading home. Then I realized the entire Store 24 building was dark. As was College Avenue heading allllll the way up towards my street.

Well! A blackout! How exciting. I started walking up College and made the acquaintance of an older gentleman toting a camerabag and tripod, and we made smalltalk as we walked about which buildings had emergency lighting (the old folks' home, of course, and the churches.) We asked a few Tufties heading in towards Davis how far up the blackout went, and they said it was all the way up to Powderhouse. Once I arrived at home, I retrieved the flashlight from its kitchen location, made sure everything was cool, and actually sat out on the balcony on the chaise lounge looking up at the stars, which you can actually view when there's no such thing as ambient light around. It was a beautiful clear night so I enjoyed the stargazing. Mr. The Cat repeatedly came out to visit; he apparently was doing his duty patrolling the premises so he had no time to hang out as he had to make sure everything was tip-top and to his liking. Once it got cold enough, I went back inside and set about lighting the place up for to read.

Tracy shortly returned and procured his bright LED lanterns, so I put away the votives I'd found in the dining room drawers. After a bit of reading time I realized there wasn't much else I could do except go to sleep. After years of city living and precious few nights sleeping back in the Valley, I'd forgotten how nice it is to sleep in a near pitch-black room. I could see a bit of the moon shining through the bedroom shade, but that was it.

At some point during the night the power came back on; I woke up and noticed the clock/radio flashing, so I hit the time ahead one minute to steady the display. Later on that morning I guess the power went back off and on again as the clock/radio was flashing once more.

But that's not the entire point of the post here. Y'see, during my walk back home with the older fellow on Friday night, he'd asked me if I'd heard anything about The Game. (In these days of the American League Championship series there are no other games; the ALCS game is, indeed, simply The Game.) I said the last I saw we were up 10 to 2 in the seventh, but then I left to go home. We agreed the inevitable win was a good way to begin the series, and then began dispensing the old chestnuts of Baseball Wisdom.

"We gotta watch out for Game 2 now, though," I said. "When there's a rout in the first game, the losers tend to come back fierce. Or at least they try to."

"Oh, yeah," the photographer said. "This'll be no sweep, that's for sure."

And, considering last night's late-night extra-innings battle, the Indians certainly did try their darndest to come back fierce. I admit while I don't relish the thought of further losses to Cleveland, I am rather proud of Trot Nixon for starting the onslaught of runs for Cleveland in the 11th. I won't follow the trend of "Ohhhh he came back to haunt us" or nothing; save that bunk for Damon, whose ignoble departure broke the hearts of Pink Hats everywhere and hell hath no fury like a Back Bay Trixie scorned. I daresay Trot's free agency didn't elicit nearly as harsh a response, and that's for the better.

I always liked him when he was with Boston; I'd often sit up in the right field box seats and holler "THAT'S MY BOY!" all George Kennedy-like whenever he went for the high pop to right or snagged a drive quickly for a throw to beat a runner for the out. "THAT'S WHAT THEY PAY YA FOR! KEEP IT UP, TROT!" He just was a darned good outfielder and we were glad to have him. So I'm just glad to see the fellow's still doing good no matter where he is. Just kinda wish he'd done good against some other team.

Speaking of some other teams, I'm hoping Colorado keeps up its winning streak over Arizona, who don't even seem to want to be in this series -- however, this will of course mean that, should Boston and Colorado make it to the World Series, every sportswriter with a cliche in their cap is going to use the phrase "Sox-Rox" until we get entirely sick of it. Hell, I've just seen it written out once -- and it was all my fault -- and already I'm sick of it. This means Tim McCarver will use it ad nauseum, as if we needed another reason to stick a sock in his mouth and place him underneath the right field grandstand until mid-November.

The Congress Street Bridge continues to fascinate me. 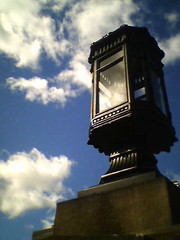 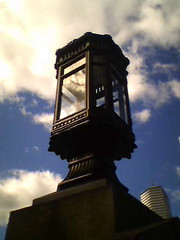 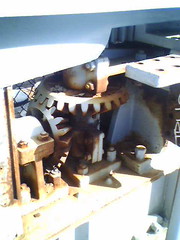 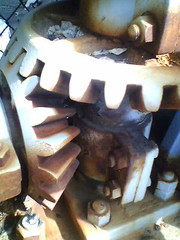