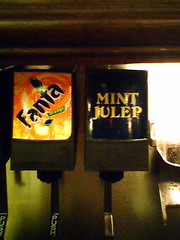 Disneyland's French Market restaurant in New Orleans Square is the only restaurant I've ever heard of what has Mint Julep right on, er, tap, next to the Fanta and ginger ale. Course, it's not the real drink, instead it's a bright neon green non-alcoholic beverage that tastes slightly fruit-like with a real mint aftertaste at the end. Still, you always get it when you go to Disneyland because that's the only place you can get it (and don't tell me otherwise if you know any better; I'm living in my happy space here.) I do recommend getting another beverage with your meal, though, just in case.

That's the only picture I actually took at Disneyland proper; I was too busy having fun. I did take some pics at Calfornia Adventure, Disneyland's second park in what used to be its parking lot (hence the nickname Parking Lot Land.) It's a little park that holds quite a bit of potential, though it's had its share of problems (including the fact that it really is a little park.) However, one of the major craw-sticking points that the Purists trot out, again and again, is the Paradise Pier section of the park, which aims to recreate a boardwalk-based amusement park like the ones that used to exist at Long Beach and elsewhere.

The purists take offense with the fact that these boardwalk parks were what inspired the creation of Disneyland in the first place. Walt was disgusted with the state of those parks in the 50s, and detested having to take his kids to those seedy places and then avoiding gum and other gunk on the sidewalk, putting his kids on the same old boring rides, and then sitting on an uncomfortable bench watching them since there wasn't much everybody in the family could enjoy together. So he then decided, by george, he'd build an amusement park himself and exclude all that he found wrong with the current parks. (He may have visited Knott's at one point and said "Ah-ha!" when he saw their themed Ghost Town attractions.)

Well, sure -- but it doesn't mean Walt absolutely detested the boardwalk parks. There was something in them that he must have enjoyed if he wanted to improve upon the concept, and I think that Paradise Pier is a reasonably successful attempt to create a boardwalk park-style setting that Walt may very well have enjoyed taking his kids to. So there. 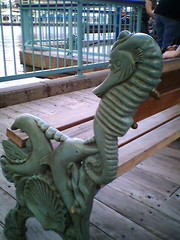 While California Adventure was built during the time when everything was strictly budgeted to the last cent and the accountants, not the Imagineers, held sway over everything, they still found the time to put in some nice details, such as these decorative bench ends, reflecting the mermaid-neptune-clamshell aspect of a seaside park. I liked that. 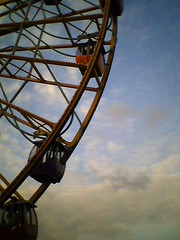 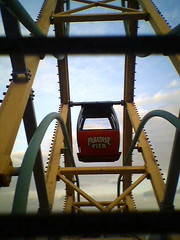 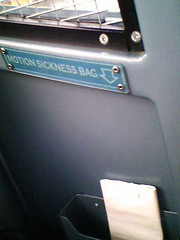 The Sun Wheel is California Adventure's version of Coney Island's Wonder Wheel, right down to the swinging cars. As I mentioned before, the Sun Wheel's swinging cars are more vicious than Coney's, which is a rather odd change of pace considering Coney was known for its super-tuned versions of regular thrill rides, such as the Breakdance. Each swinging car was helpfully equipped with its own motion sickness bag, which amused me to no end. 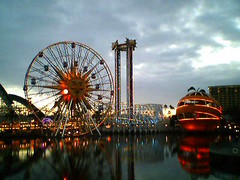 The park really does shine at night, as a good seaside park ought to. Lots of lights and swirls around its architecture. While it may not be the quintessential experience and lacking a bit in the ride department (the big attraction is, of course, the California Screamin' coaster which is indeed a hoot and a holler) it's a fair attempt and once they've put in the Toy Story Midway attraction in 2008, I think this place will see a bit more traffic and get a bit more love.

My father loved the Marx Brothers above all other comedians or, indeed, all other movie stars. The first movie he ever took me to was "A Day at the Races." All I remember about that experience was the fact of my father's laughter. But there was something else, too, that I understood only much later: The sound of his voice as he described the brothers. He used the tone that people employ when they are talking about how someone got away with something.