Last week when I uncovered THE MYSTERY OF THE GIANT HONKIN' SKULL at the Kendall Square station, I noted that two out of the three pieces of the Kendall Band aren't working. The Kendall Band is an interactive set of music-making apparatus (apparati?) strung up between the two train tracks and crank-operated by people on both platforms. It was installed in the 1980s after the Red Line was expanded and Kendall Station renovated.

One piece is a series of tubular bells with mallets in between. The cranks start the mallets swinging, and if you cooperate with the person on the other platform cranking at the same time, you can get the mallets going pretty fast and the bells chiming all over the place.

Similarly, there's a giant metal ring with a Mallet of Damocles poised over it; your cranking ratchets the mallet up, further and further, until it's released and gives the metal ring a mighty wallop. If two people are cranking, the mallet rises faster. There may also be two mallets involved. I can't remember.

The third piece, which is the only piece left working, involves a large piece of flat sheet metal. Each crank flexes one side of the sheet, so again, if you and that Whoever on the other side work together, you can shake the sheet and get the thunder sound effects from it.

So why aren't the first two working? The Glob helpfully helps us with an answering answer: Because the artist who created them can no longer keep them running by himself. This artist, by the way, is Paul Matisse, grandson of Henri Matisse, so our Kendall Band has one mighty fine pedigree. But Paul Matisse is in his 70s and cannot keep the schedule that the maintenance demands (especially since it means fixing the things late at night after the T closes.)

Oh, yeah, and there's a lack of funding to maintain the project. It is officially MBTA property and although they coughed up some cash for repairs recently, it's pretty clear they can't budget anything more. So, in the best MBTA tradition of dealing with things they just don't feel like maintaining anymore, the T has pulled an Arborway [1] and quietly removed the controls for the two non-working pieces. And unless Paul Matisse can find a benefactor not only financially but mechanically, the Kendall Band may just be forgotten into oblivion.

Well, actually, I'll bet you dollars to donuts that since they have just removed the controls, the T won't bother to remove the rest of the apparatus if new upkeep providers can't be found. Removal costs money. Ruins can stay up for free. That way for years to come folks will stare at a giant metal ring and wonder what statement the artist, whoever he or she is, was trying to make. Of course, they won't even be getting half the intended effect. It'll just engage one sense instead of three.

It does worry me about the state of the MBTA's mechanical aptitude when people in the Glob article are quoted as doubting the T could perform adequate maintenance, but frankly, I'd rather see people with money and mechanical expertise take over and fix up the installation so it's all out of the MBTA's hands. The Authority(TM) is cash-strapped as it is, and I'd rather see them spending more money on overall improvements and repair, as idealistic as I realize that sounds (hey, Graubaskas needs gas money so he can drive to work. Budget that in.) And I'd rather see people who care about the piece, people who would care as much as Paul Matisse has for twenty years now, get the chance to do their thing for it as opposed to some guy who just knows his jerk of a boss told him to go string that wire up around that ratcheting pulley thing what the hell is this and where does he get off tellin me to string wires around ratcheting pulleys anyway?

Boston's was the first program in the country to install works of art in public transit systems. And how many of those pieces captivate or confound us on a daily basis? There's the fun ones, like the Kendall Band, the thought-provoking ones such as the bronzed workmen's gloves on the Porter Square escalator and platform, the poignant pieces of verse carved into the Davis platform bricks, the David Lynch-Meets-Tim-Burton crazy jumble of floating objects above the Broadway station staircase, the neon rods over the Alewife berth (the ones that glow are the ones which haven't been covered in dust or soot yet), the Park Street Station frieze/mosaic/mural/whatever constructed entirely out of found railroad objects...

Art's everywhere on the T.

Over twenty-five years ago a bunch of people thought it'd be a great idea to put accessible works of art in a place where they'd be seen, for free, by thousands of people on a daily basis. These works of art are seen, discussed, enjoyed, even laughed at -- but they're noticed. Most importantly, they make each station unique and provide something special, something to help you enjoy what might otherwise be another dull, boring, soulless commute.

Unfortunately, the planners made one crucial mistake: in granting MBTA ownership of the artwork, they presumed the T would always be a system that would have the funds and the workforce to maintain them. Our current bloated, monolithic transit entity can't afford to accomplish much these days.

Who can step up to help the Kendall Band?


1. The MBTA likes to just close or discontinue things and then pretend like they never happened. Ask Watertown -- or, better yet, ask Jamaica Plain. In 1985 the MBTA announced a "temporary 11-week closure" of a section of the Green Line's E branch running from Heath Street to Arborway. Today, twenty-two years later, the E branch still terminates at Heath Street, making this closure the longest 11 weeks in recorded history. 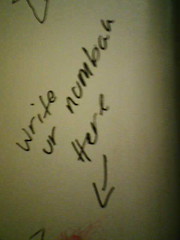 Red Line train. Back of the cah.
Below were several numbahs: 1, 5, and foah.
Collapse