Ever seen the secret on the Kendall T platform?

The light in these pics may be a bit wonky, but hey. The Kendall/MIT subway station has several interesting murals along its walls, as well as mechanical devices that allow you to make funky sounds while you wait for the train (well, when the devices are working, that is.) One of the longer murals you can view is a year-by-year history of MIT, done up like the Periodic Table of the Elements. Kinda neat. 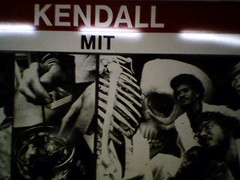 Why, this one shows a bunch of students on the right intently studying the rib section of a skeleton. Interesting, okay, but what's that behind the fellow in the back? 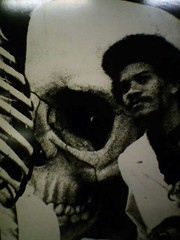 And now, much like how those who know the existence of the FedEx Arrow can never look at the logo the same way again, you will always see the skull when you ride into Kendall Station. The mural is at the very far end of the outbound platform and, quite possibly, on the other side of the station at the very far end of the inbound platform too, but I don't know. I just know outbound.

In less'n two hours we'll be recording the first four episodes (one whole serial's worth) of RED SHIFT: INTERPLANETARY DO-GOODER, the radio serial I concocted one evening when I probably was supposed to be doing something else (that's how all great ideas come about.) I wish I could tell you the feelings I've got right now regarding taking a project all the way from silly joke to concept to a series idea to initial scripts to auditions to rehearsals to revisioning to live performance to more revisioning to actual factual professional recording, but I can't. Not right now, at least. I've got too much to think about right now anyway and we're not out of the woods just yet: I will not consider this entire endeavor a success until you, yes, you actually have an MP3 file in your hot little hands (or hot little iPod or whatever hot little media player you enjoy using hotly and littly.)

We'll hammer out the podcast delivery and schedule at some point, but right now, it's time to take one of the major steps. I can't wait to work on the promo material, even though anyone can make promo stuff for any type of project, real or imagined. But having an actual product, made by people who know their shit, makes things seriously legit. Y'know? And do you know how exciting that feels?

Off to CVS for cough drops and antacid and a scrip refill. Then it's time to turn on Doc's voice and direct at the same time. Hopefully we'll be out in time for me to make some of the Tony Awards, as Mo has concocted a drinking game which she only halfway stole from the Oscars. Judging from the rules of the game, I'm reasonably sure Mo will be completely incoherent by the time I get home, and I'll have to decipher drunken IM. Not like that's ever happened before. (We'll see about my participation, tho. No need to get schnocked on a Sunday night with a 6:00 am alarm the next day.)

Hey, I just looked at my hands and, just like Michael Corleone's, they're rock-steady. Guess I am ready for this after all.

I don't think it's a very good idea to bust into Tony winners' speeches with "play you off the stage" music.