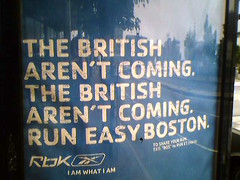 Reebok had these silly ads around South Station during the Boston Marathon weekend. This ad is still up on Summer Street near the Fort Point bridge intersection. The gist of the ad campaign was that it was okay to not run like a banshee and then pass out from heat exhaustion while you cramp up and die. And that apparently Reebok shoes are good for not cramping up and dying in. And that when you're cramping up and dying, you begin your sentences with 'and' and end them with a preposition.

The slogan picked to help us remember not to cramp up and die is "Run Easy" which, in and of itself, is an okay slogan. But this is the Age of Local Branding, so the Reebok ads in Boston had to pertain to Boston, and apparently that also includes adding the city name to the end of their spiffy slogan. Thing is, "Run Easy Boston" isn't really a proper sentence. Thankfully here some kind grammatician has actually affixed a little comma sticker to the sign and made a decent sentence out of it. 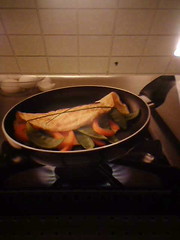 This is actually a picture of cookware in Target showing what dandy foodstuffs you can make with their dee-luxe cookware sets. Thing is, we think for some of the pictures, they just threw whatever they had into the picture for MAKE LOOK FOOD.

This, for example, appears to be an omelet with what look like garden peas -- still in the pod, mind you -- and red peppers. With two blades of grass on top, apparently. Just my morning usual, really. 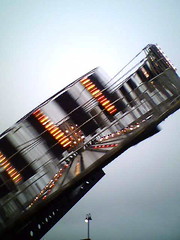 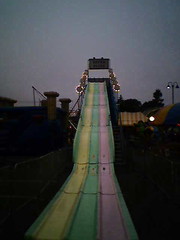 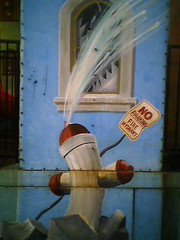 Oh, and there was also a RANDOM CARNIVAL IN MEDFORD this weekend and we happened across the tail end of it tonight. There's some rides and some dark ride/funhouse bally art, too, including, well, a disturbing fire hydrant. See? Oh boy.

Here's the entire set and how.
Collapse