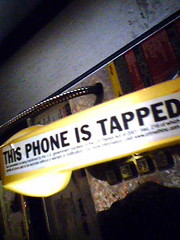 (I'm tappin' that phone on the side like it was a pinball machine. HONK HONK!)

Last night I was walking home up College Ave when I watched some Papa John's delivery driver nearly blow through the Morrison red light. It was solid red for a reason: three older Chinese folks, two women and a man, were in the process of crossing with the WALK light. The delivery car screeched to a halt in the middle of the intersection. This quite naturally pissed the man in the crosswalk off.

The delivery driver said something, I couldn't tell what. Or maybe he said something with his finger. The guy responded "NO! YOU ARE WRONG! YOU STOP WHEN THE LIGHT IS RED!"

They finished crossing the street and the driver began to go thru the intersection even though the light was still red. As he passed, the driver bade the pedestrian farewell, and I'm gonna presume it involved an ethnic slur, because it set the fellow off like a roman candle. He flew into one hell of a rage.

"YOU BASTARD!" he screamed. "I'LL BEAT YOU!" And then -- it's been a long time since I've seen someone act so quickly out of pure, unadulterated anger -- he rushed towards the car, which unfortunately had the advantage of speed on its side. So the guy stooped down, picked up a chunk of ice, and just hurled it, in sheer frustration, in the general direction of the car. It was the angriest throw I've ever seen. He missed, of course, and the ice shattered on the street, and the two women quickly took the guy aside to calm him down and get him to walk away from the scene.

It happened in the space of, oh, maybe 45 seconds. I thought of calling Papa John's and letting them know their driver nearly had his rear window smashed in with a chunk of ice for very good reason, but decided not to. I don't order from them anyway; their pizza gives me the toots.

Today's best (and probably only) Timbuk 3 ref drop goes to Boston Police Department News blog for its brilliant headline (admittedly with a typo) for a story involving a thwarted robbery:

Seriously, if you haven't put the

bpdnews feed on your friends list, you gotta. Sure, there's a lotta depresso in there about gunshots and murders, but you also get stories with headlines like that. Or the story of the fellow parked alone in his car in the middle of the night who, when approached by police inquiring as to what he was doing, casually answered "Oh, just smoking a blunt."
Collapse