The AP is reporting that Jeanne Kirkpatrick, the first woman U.S. ambassador to the United Nations, has died at 80.

And my first reaction, swear to God, was "Bill The Cat must be crushed."

Sure, I've previously eulogized Caspar Weinberger with Opus' tender ode, but this kinda just hammers the point home to me. I can now face facts and admit that everything I know about US foreign policy in the 1980s I learned from Berke Breathed.

I was taking the T in to work this morning. I had a doctor's appointment beforehand, so I left for the trains a little earlier than I usually do.

The trip was pretty normal until we pulled into the Kendall station. I noticed some of the lights on the platform across from us were flickering. It looked like the flickering of a fluorescent light on its last legs, only there were several lights doing this. And then all the lights were doing it. And then they all went out.

From my vantage point on the train, it just looked like the T had gone and blown a fuse or something and, considering their current maintenance track record, didn't surprise me all that much. It didn't look like an emergency, just another annoyance. Light was streaming in from the ground entrances and it looked as if all the Charlie gates had opened themselves and stayed open (a very smart move in the event of a power outage. Thank heavens they gave a bit of forethought to possible evacuation scenarios!) I just hoped that this power outage wasn't about to affect the train, too.

It didn't, the train's lights and engine stayed on, and a few moments later we pulled out of Kendall and made it across the Charles. We probably were the last inbound train to do so before the T had to start busing passengers from Central Square to Park Street. But it wasn't their fault. See, there was a big electrical fire in a Cambridge office building right by Kendall Square, forcing evacuations and causing power outages all around the area. The trains stopped, the fire departments responded, and from the reports both newspaperly and LiveJournally, everybody got out all right, but some folks are still suffering from heavy smoke inhalation. The reports say the fire started at "just after 11 am", which, judging from the time I got to South Station today, was exactly when I was on the train at Kendall watching the lights flicker.

It's so weird to be right near a scene like that -- hell, right under a scene like that -- and have absolutely no idea what's going on. I'm not going to play the "What-If" game or compare it to other urban disasters, however. I'm just glad everybody's ok (and, since journalling is always supposed to be "all about me", I'm glad I made it to work on time.)

After finally finishing up the first season again last night (an episode a night over dinner, when I eat in) I can now unequivocally and irrefutably pronounce that Arrested Development is indeed the Soap of our generation, o Peers O' Mine.

There's not an argument in the world that can be made against this! I defy you!

byrneout and YouTube comes the most awesome and frightening thing I've ever seen without dosing first: The Mystic Knights of the Oingo Boingo on the Gong Show. The consensus from the comments is that Danny Elfman's on trombone. The most frightening part of the whole thing, I think, is Buddy Hackett's hair. By the way, the Gong Show's grand prize, $516.32, was SAG minimum in those days for a speaking role on television.

010. Give a cheer! Matinee at the Bijou is coming back to PBS! I think this may have been when I first got a taste of old films, cause I remember watching it when I was but a wee lad enrolled at the hippie elementary school. It was a weekend show on PBS, and it pretty much was a bill of fare as would have been seen at a movie theatre back in the 1930s and 40s. They'd show an episode of a serial, a newsreel, maybe a comedy short, and a feature film. Well, apparently it's coming back next year and Debbie Reynolds will be hosting. That's awesome.

011. Check out the latest reason why I like my cameraphone: 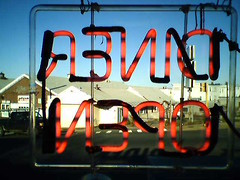 The camera caught the "excited" neon gas pulsing in the sign. That's awesome, too.

100. File under Wikipedia Will Eat Itself: http://en.wikisource.org/wiki/Hunter_S._Thompson_suicide_note

Yes, they're arguing over whether suicide notes are copyright protected or in the public domain. So when you end it all, be sure your "Goodbye, cruel world!" is distributed under the Creative Commons license, 'kay?

101. And finally, before I leave for the weekend and do cool things, I'll let you know that I'm gonna develop a sitcom set in the early 90s featuring a cute and spunky indie film actress and all her slightly surreal adventures in high school. It'll be called Parker Posey Can't Lose.

Goodnight, everybody! Tip your waitress!
Collapse