We all knew about Bruno Kirby, sure, but how come nobody told me Mike Douglas died?!

I loved Mike Douglas when I was little. More than Dinah Shore but not as much as the Match Game. Ah well. It just means that all three hosts are now gone, gone, gone.

Oh and I forgot to report that yesterday's used book romp resulted in one (1) set of memoirs about Harold Ross as written by James Thurber, and one (1) collected set of letters written by Fred Allen for only 3 bucks. Ross, Thurber and Allen are all dead, too, but they've been dead longer than Mike Douglas. 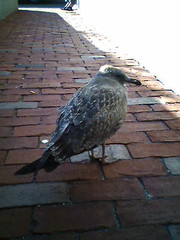 This juvenile seagull has been hanging around outside my office building for several days now, making sad keening noises. I recognize the noises as looking-for-mom noises, but she's nowhere to be seen -- and mama seagulls are usually very quick on the "My baby is in trouble! Must spring into action!"

We can't tell if his mother has decided now was the time to leave him to his own in the world, or if she died prematurely (there were reports of a dead seagull in the parking lot a few days ago, but who knows?) He doesn't seem ill nor injured; no visible injuries at least. He's just on his own and quite sad about the whole state of affairs.

He's lost all fear of people, too, mostly because I think people are taking pity on him and feeding him on their lunch breaks. I have yet to figure out if this is a good or bad thing. I haven't fed him myself. I don't know what would happen if Animal Control were called.

What would you name him?
You get negative points for using the words "jonathan" and "livingston" in your name suggestion.
Collapse