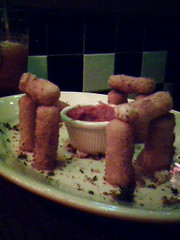 THIS SHRINE WAS BUILT ENTIRELY WITHOUT THE USE OF MODERN TOOLS!

I told the waiter it really wasn't a statement on the quality of the CheezStix(TM), which were okay as far as CheezStix(TM) go, I just couldn't finish. He said he was honestly impressed.

You know, really, you ought to just go over to the Brattle and give 'em a $20 bill. Just cause.

Tonight was Hans Conreid night at the Brattle. Not only did he voice the two kings in THE PHANTOM TOLLBOOTH, but he also completely and utterly stole the entire goddamn show, lock stock and piano, in THE 5,000 FINGERS OF DR. T.

The first film will give you new respect for Chuck Jones as an animated director; the animation and the art direction was incredible. I'm not sure who's responsible for the film falling apart near the end, once Rhyme and Reason start doing their thing, but wow. Overall it's just plain incredible to watch. What a visual treat. Even though Norton Juster is an Amherst local hero and I love the book and all that, boy howdy does the metaphor step back near the end and go "You know what, folks? Just present this shit literally. Yeah, just, uh, shoot the Two-Headed Hypocrite with the word 'FORTHRIGHT'. And shoot the word 'HUMILITY' at the Know-It-All. There you go. If you need me, I'll be out back sucking on some Freudian imagery."

Even so, I love good ol' Tock.

DR. T, by the way, was incredible. Absolutely incredible. A complete and awful mess, to be sure, but it's live-action Dr. Seuss right there on the goddamn screen and a live-action Hans Conreid doing his most incredibly campy villain role ever. The set design for this film is Fritz Lang meets Dr. Seuss meets Technicolor. The musical numbers are horrible, with the exception of a few key dance numbers and Conreid's dressing sequence. The plumber looks like he'd be better off as the captain of a spaceship in a z-grade sci-fi number. There are two men with conjoined beards on rollerskates. And Mr. Conreid chews every available piece of scenery, intones every line with amazing camp, and ust looks fabulous. I highly suggest someone making me the goddamn purple-and-black outfit he has for a Halloween costume. I can pay cash moneys for it too. The film is both terrible and awesome at the same time. While the Brattle crowd howled a lot for a 9:30 show (and some guy in balcony center had this incredibly loud, braying laugh that at first I thought was just sarcastic, but turns out it must've been his real laff) there sure was a lot of applause after certain scenes.

And any time you can applaud both Chuck Jones and Dr. Seuss in opening credits is fine by me.

Tonight was also Child Actor Night at the Brattle; Tommy Rettig from Lassie played the little boy hero in DR. T and Butch "Eddie Munster" Patrick played Milo in THE PHANTOM TOLLBOOTH... at the AGE OF SEVENTEEN?! Holy cats!
Collapse