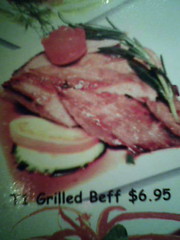 The Drowsy Chaperone is a new Broadway musical by way of Toronto and it's a pip. It's both a send-up and an homage to musical theatre at the same time, loving in its parody and disarming in its tribute, and I loved it all.

It's rather hard to explain without giving too much away, but let's try: the show opens in a dingy apartment, where an aging and slightly bitter musical theater aficionado (known only as "Man In Chair") plays for us a record of his favorite "long-forgotten" musical, 1928's "The Drowsy Chaperone." He amiably chats the musical up with us while the overture plays on his tinny record player, and -- as he sits back and closes his eyes -- the musical comes to life in his apartment, with characters entering from all over, even thru the fridge, and the apartment set is transformed into just the kind of Broadway spectacle we all wish we had in our living spaces. There's even a trap door, for crying out loud.

The Man is one of those detail-obsessive fans, so he routinely interrupts the musical proceedings to give us tidbits about the cast (some of whom met gruesome and ironic ends), explain why certain scenes were included, and even has time for a rant or two. The rest of the time, though, he gleefully wanders around the performers, watches their goings-on with as much enthusiasm as the rest of us, and mouths a few lines or two of his favorite songs. When the scene changes to an outdoor garden setting, he grabs an afghan off his chair, lays it on the ground near the actors picnic-style, and watches from there.

But here's Reason #578 why I liked the show so much: At the beginning, the Man explains to us that the show we're about to hear opened in 1928 at the Morosco Theater. "Of course, the Morosco's not there anymore," he opines. "It was torn down a while ago. They put up a high-rise there, a hotel or something."

And indeed that's what happened.

The Morosco was an actual Broadway theater, built in 1917 and located on Broadway between 45th and 46th. In the early 1980s the block that the Morosco was on (which included two other theaters, the Bijou and the Helen Hayes) was slated for demolition to make way for a new high-rise hotel. There was fierce, fierce, fierce opposition from the theatre community, who took it upon themselves to save the three doomed theaters. They erected a stage outside the Morosco and held round-the-clock readings of the plays, many Pulitzer winners, that had been produced in those theaters. When the Supreme Court finally overturned their appeal in 1982 and let the demolition continue, 500 mourners watched as the theaters were pulled down. 200 of them refused to leave the site and were arrested, eventually becoming known amongst themselves as "The Morosco 200."

And the hotel that was built on the ruins of these three theaters? That was the Mariott Marquis. Which features, above its lobby, the Marquis Theater.

Which is currently home to the production of... (here comes the Paul Harvey "Rest of the Story" pause...) The Drowsy Chaperone.

I love it when people do their homework.

Al Lutz, that tireless (yet often tiresome) Disney park chronicler, has posted a little explanation on the new changes to Pirates of the Caribbean, what with the new movie tie-ins and all. (Spoilers in that link, Capn.) After reading through it, it appears to me that things don't seem as egregiously hacky as it could've been. That's a relief.

Also a relief is the news that the lame-o 1997 revisionist "Pirates chase food, not women" angle has indeed been purged, mostly in favor of more Jack Sparrow fun. I find that tradeoff more than acceptable.

Maybe I can go next year!
Collapse